skip to main | skip to sidebar

This Week in Writing

Each Monday I plan to post a weekly writing activity taken from my current reading and study on the craft of writing. This activity will be one that I have chosen to work on myself, and invite all of you to be my "writing buddies" in the effort!

The Narrative Time Line
(The Right to Write, Julia Cameron) 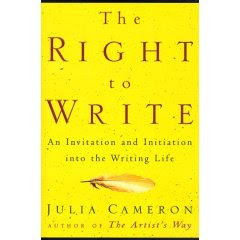 Cameron assigns this activity to her writing classes, along with Morning Pages. The Narrative Time Line is a "longhand, autobiographical account" of your life, best written in five year intervals. "Grab a new notebook, your fastest pen, and preferably a writing buddy," Cameron writes. Prepare to write for one hour, and when you set pen to paper, focus on the major events and people in your life. Try to avoid delving into too much emotional detail (you'll have the opportunity to do that in another activity!) Cameron recommends this activity should be completed in several sessions over a period of one month.


What's the point? "What arises from this exercise," Cameron says, "is a sense of fascination and self worth regarding the events of one's life. Inevitably, certain episodes and people beg for deeper writing than the mere facts will allow." These incidents and people will form the basis for another writing opportunity later on.

"The rewards of the Narrative Time Line are enormous," she goes on. It helps you win a version of yourself that is "self-determined and autonomous." You can "make connections that have eluded you," even in years of therapy. And, you may discover that your own life contains some fascinating material!


I'm off to my favorite cafe, new notebook and pen in hand to begin my own Narrative Time Line. Grab yourself a second cup of coffee or tea and join me, won't you?

Labels: This Week in Writing

"I'm sure you must think I'm the most wicked thing ever."

Susanna watched her friend Alaina delicately scrape up the last bits of chocolate edging her desert plate and lift the fork to her moist lips. "Mmmm," she sighed, closing her eyes and tilting her head back slightly, savoring this final morsel of a dessert that had been meant to share between the two of them. "I just can't help wanting to have it all...even though I know I shouldn't."

If only Alaina had been speaking about this slice of chocolate torte, Susanna thought, eyeing her friend with a familiar mixture of envy and distaste. Taking the last sip of her coffee, now grown cold and murky at the bottom of her cup, Susanna replied in the way she knew Alaina expected her to.

"You're not being wicked, exactly," she ventured, wishing she had the courage to lay bare her true feelings. "But you could be setting yourself up for a lot of problems and heartache down the road with this relationship."

"Susanna, honey," Alaina said, "if I worried about what might happen 'down the road' I'd never have any kind of life at all." With a characteristic toss of her head, black hair coming to rest languorously over her shoulder, Alaina leaned across the table conspiratorially. "Besides, I just cannot ignore this marvelous chemistry between us~it's irrefutable."

Susanna sighed, having heard this tone of voice many times in the 20 years she and Alaina had been friends. Not for the first time, she wondered what had drawn the two of them together, back in Mrs. Allen's seventh grade history class. Susanna, though pretty and popular enough by junior high school standards, was certainly no match for Alaina's fiery beauty and burgeoning sensuality. Even in those simpler days, Alaina's desires were not easily sated. Susanna remembered her friend's dangerous relationship with the mechanic at Steve's Garage, who had been less than pleased when he discovered his eager girlfriend had lied about her age, and was in eighth grade at St. Andrew's. Try as she might, Susanna had been unable to convince her friend that dating a 23 year old wasn't a good idea. Green eyes alight with excitement, Alaina had merely tossed Susanna's objections aside. "Why shouldn't I do whatever makes me happy?" she said.

Alaina glanced at her watch and reached into the slim Prada handbag lying at her elbow. "Have to run," she said, placing a twenty dollar bill on the table. "I'm meeting him at the Hyatt for drinks before we head to the airport."

Susanna knew that this "he" was the latest in a long string of Alaina's forbidden lovers. Mostly older, mostly married, usually rich, and always completely smitten with her dark beauty. Susanna couldn't help but feel fascinated with this woman's ability to entice any man she wanted, and even those she didn't. There is something almost wicked about her, Susanna admitted to herself. Yet, somehow, I don't think she realizes it.

Alaina leaned down and brushed Susanna's cheek with an airy, Chanel scented kiss. "Darling, you do worry so," she admonished. "Haven't I always managed to come out of these things on top~so to speak!"

Susanna's narrowed eyes remained on Alaina's back, cutting an elegant swath around the other diners on its path to the door. "Perhaps you have," she thought, taking her cellphone from the leather case she wore attached to her belt. "But you know what they say, my wicked little friend...all good things must eventually come to an end."

Clicking through her speed dial directory, Susanna stopped at Martin's number. Dialing her husband's phone, she hoped she could catch him before he arrived at the Hyatt's lobby bar. She had a feeling he would want this conversation to be held in private.

links to more wickedness
Posted by Becca at 12:45 PM 5 comments:

Trent told her how slippery the roads would be - warned her, actually, as she was grabbing her jacket from the hall closet, sending the heavy wooden hanger ricocheting around the rod and clattering to the floor. "You'll not want to be walking very far, Daisy," he cautioned. "It's a solid sheet of ice on them sidewalks."


"I'll be careful," she had promised, not wishing to worry her brother, just desperate to get away from the stifling atmosphere in the little house they shared. Though now, inching her way along the street with each step a potential disaster, Daisy felt her body become more tense than ever as she struggled to maintain her balance on the icy road.


Gritting her teeth, Daisy ached to stretch her long legs into a free and easy stride, to march purposefully along as if she were heading toward some positive future. Yet once again, she thought ruefully, I'm tiptoeing along in baby steps, just doing my level best to stay upright. I'm always being careful - careful at home, making sure Trent is taken care of, careful at work, making sure all the numbers add up right at the end of the day, careful with Davis, trying so hard not to slide down that slippery slope and let myself fall into love with him.


By this time, Daisy had made her way onto Main Street, where at least some small effort had been made to clear the snow and ice from in front of the storefronts. But the east wind blowing off Lake Erie kept sending more snow flying in swirls around her head, lashing her cheeks with stinging pellets that settled onto the pavement like dusting's from a jar of baby powder. Relaxing her posture and lengthening her stride, Daisy passed the nearly deserted shops and restaurants, remembering the phone call from her sister Lauren that had sent her barreling out of the house on this angry winter night.


"Daisy, you're letting life pass you right by," Lauren had proclaimed, as if telling Daisy something she didn't already know for herself. "You're almost 35 years old! You've got to quit being so darned cautious about everything and take a chance now and then. Why, where would I be if I had never gone out on a limb and...."


At this point in the conversation, Daisy dropped a steel barricade in her mind, letting the words of Lauren's familiar refrain slam themselves against it and lie in a soundless heap just short of her consciousness. It was all so easy for Lauren to say, with her happy marriage, two perfect children, and fancy city career. Lauren wasn't the one left holding the bag when mom and dad were killed in that train accident, Lauren wasn't the one who took over the family business and became responsible for Trent's care.


Daisy could feel her heart racing, and noticed the first inkling of dull pain at the back of her head announcing "migraine coming soon." She tried to quicken her step, noting that she had come out on the other side of town and would need to double back through Harden Park in order to make it home. Dusk was settling over town, leaden grey skies darkening ominously over Daisy's head. She shuffled warily across the slick road and into the park, wishing she had taken a few extra minutes to put her Igloo's on.


Within a split second, Daisy felt her right foot fly from under her, her left slipping along behind it. She wrenched her back and flailed her arms about, trying to keep her body upright, but the ground beneath her was solid ice, and she didn't stand a chance of righting herself. Her tailbone jarred as it hit the frozen ground, sending shock waves of pain running up her spine, and cold wind lashed her face as she went careening down the hill into the valley that ran along Hayden Creek.


Stunned and shaken, her head throbbing in a full blown migraine, Daisy came to rest in a heap at the bottom of the hill. As her heart began to slow its frantic beat, she recalled the sensation of sliding out of control down the hillside. To her surprise, exhilaration began to replace fright, and the misstep that sent her tumbling became reminiscent of an insistent hand at her back providing a nudge of encouragement.

"That was certainly throwing caution to the wind," she thought, grabbing hold of a tree trunk for support and gingerly getting to her feet. "But, actually, it wasn't half bad." Breathing deeply, she faced the slippery uphill battle ahead of her, and started inching her way carefully toward home.
Posted by Becca at 3:24 PM 32 comments:

Tip of the Day

Becca
An American woman, newly embarking on the second half of her century here on earth, reflects on Life in General, and her own in particular